No website that is dedicated to Enfields would be complete without at least mentioning this.
The bad news is that insofar as we are aware, there never was such a thing, and British soldiers with their Enfields did NOT fire 30 rounds a minute as a general rule (although we accept it is possible).

However, as part of their training and annual classification tests, soldiers would be expected to fire 15 rounds, at a Second Class Figure target at 300 yards within one minute, starting with one round in the chamber and 4 in the magazine.  This can be seen in Practice 11 below, taken from Musketry Regulations Part I. 1909 (amended 1914). 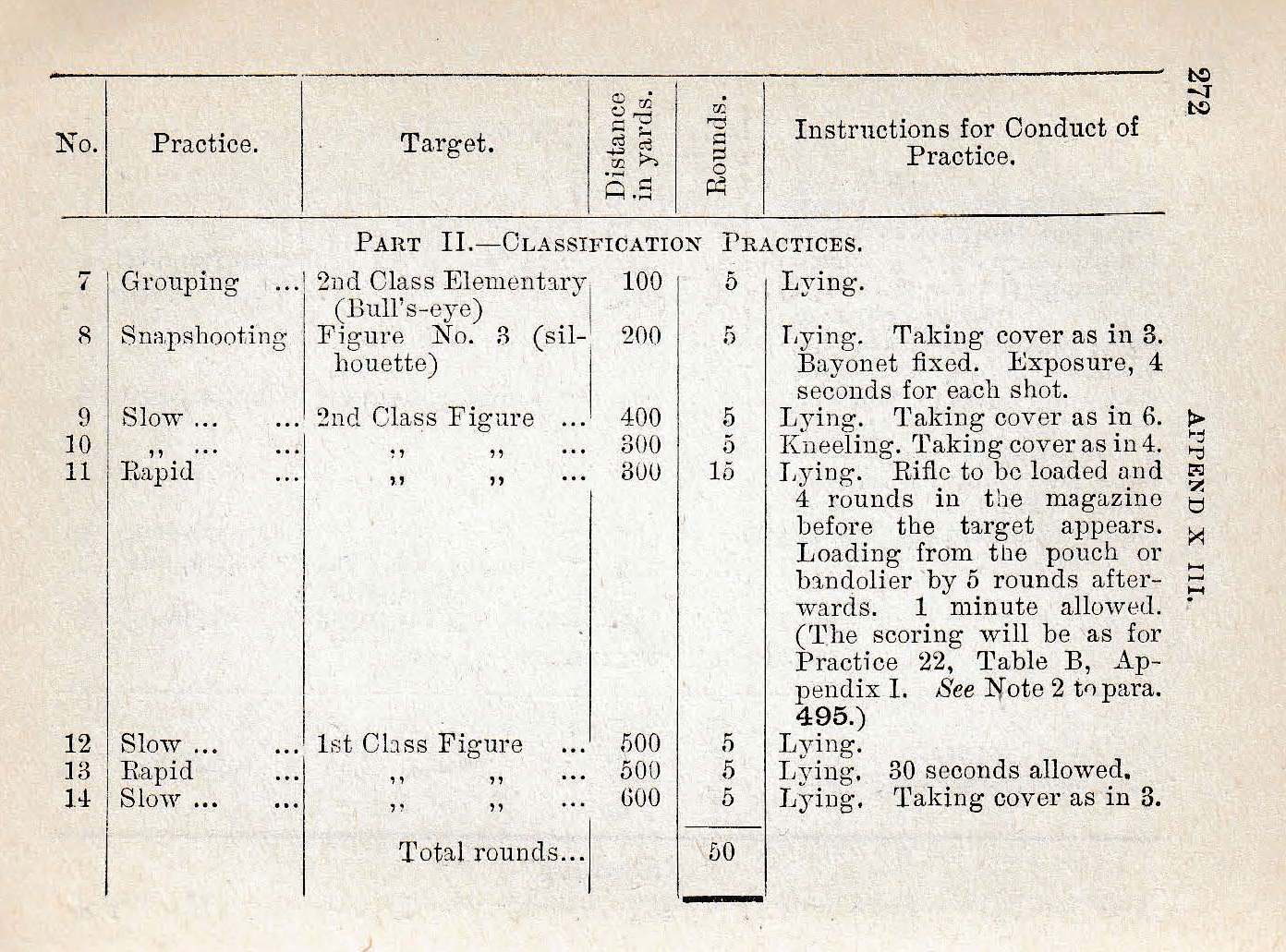 Notice the words "Loading from the pouch or bandolier by 5 rounds", this slows things up considerably.
(Note; Yes, I scanned the wrong page and hence the wrong table but the practice is the same.  I should have scanned Appendix I, Table "B", Part III. which is page 260, in which case it would have been "Practice 22")

The 2nd Class Figure Target is shown below.
Shots would be scored - Inner = 3 points.  Magpie = 2 points.  Outer = 1 point.
The figure in the centre would normally be the Bull, but for this practice it is just the aiming point.
It would normally be coloured, the bottom half green, the top grey and the figure brown.

So like most myths and legends there is some truth in this one.

And the German reports that the British infantry had machine guns?  Well, do the maths, a platoon of 30 men, each firing 15 rounds a minute comes out at 450 rounds a minute, which is about the same as a machine gun of the period, if you were on the receiving end of that, what would you think?

The second part of this legend is the Sergeant who doubled the expected number of rounds fired to more than 36.

Yes, there really was a Sgt Snoxall at Hythe, and yes, he really did manage to put an awful lot of rounds down range.
But it was for a British propaganda film, and we have no way of knowing where those rounds actually went, or how many “takes” they did, or even if his name really was "Sergeant Instructor A Snoxall" for that matter.  Nobody that I am aware of has ever found any official record of him.
They of course “cut”, from him in the firing trench surrounded by suitably impressed senior officers, to them all looking at A target.  Was it his target? highly unlikely.

The film used to be available to watch on the Pathe News site, but for some reason they took it down a few years ago.

He did it from a properly constructed firing trench in the “Standing Supported” position, which makes it much easier as your body weight is not being supported on your elbows, as much of it is when you are in the prone position.

The biggest difficulty is the reload, it takes an awful lot of time (relatively) no matter how good you are.  And if you try and do it in the way that most Enfield shooters do today, loading 10 rounds from 2 charger clips, having just emptied the mag, you will almost certainly not get past 30 rounds.  If you are REALLY good, you might get 35, but no more.

The trick is to start off with 10 rounds in the magazine and one in the chamber, then fire in 6 round “bursts” to make counting your rounds easy.

So fire 6 rounds and then reload with a clip of 5 (In 12 seconds) and then repeat the process until you run out of ammo, and you will have fired 36 rounds in a minute. Easy!

How you do that AND hit the target, we have no idea. As we said, he probably cheated on that bit, in the national interest of course as we were expecting to go to war at the time.  The charger clips he used would have been carefully selected and then polished up on the inside with stove black as lubrication and he would have been practicing for weeks.

So if you practice with drill rounds, and can fire 6 rounds and reload in 12 seconds then you might be able to do it.
More than 36? Impossible we suspect (just wrap your right thumb in some kind of protective tape and keep practicing).

(Take a look at the article "Charger Clips" also on this site).

The other trick he used of course was pulling the trigger with his middle finger, his thumb and index finger never letting go of the bolt.  You will find lots of demonstrations of that online.

If anyone succeeds then do please let us know, with video evidence if possible.

So, for now, Sgt Maj Jesse Wallingford who, in 1908, managed a well documented 36 hits on the target in one minute is (in the authors humble opinion) the one and only champion in this.